INTERCAMP 2014 will be taking place in Bad Lippspringe, near Paderborn (Germany) and will be hosted by our British Scout Leaders based in Germany. The camp starts on June 6th (day of arrival) and ends on June 9th (day of departure), the program is taking place on Saturday and Sunday.

Registration opens in the first half of November and closes on 1st February for IST and 1st March for Groups. The camp fee is € 20 p.P. – if we receive the payment before February 1st (IST) or March 1st (troops) the price p.P. is reduced to € 15.

The camp theme is based on England, Scotland, Northern Ireland and Wales.

We will be including A Village Green, A Summer Fete, The Highlands, The Welsh Valleys and of course The Green Fields of Ireland. All of our many activities will be based around these Themes, boasting a Typically British Flavour. We will also be including some of your regular Intercamp favourites, such as T-shirt printing, Wood burning, Scout Shops, Scout Museums and Post office.

Our Hike will take you through the beautiful town of Bad Lippspringe seen here.

We ask all groups who attend to bring a box containing objects with information on their Group and City /town, these Objects can include anything from Pamphlets, Necker’s, Badges, letters, tins or packets of food anything which can be associated with their origins. This box should then be sealed and decorated. At the opening ceremony be used to build a wall. This wall is not a symbol of boundaries or boarders but to symbolise working together. At the End Ceremony each group will be allowed to take home a piece of the wall (ie one box and the information inside the box can be used to make contact to the original owner). 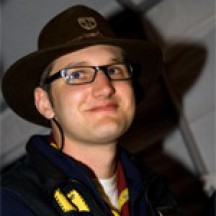 Johannes is a scout since the age of 6 and actively involved in Intercamp since 2004. From 2006 until today he never missed an Intercamp and worked in all kind of jobs in the International Serivce Team (IST).
In 2014 he was asked to become a member of the Intercamp committee, being responsible for the website and public relations.
Join the Club
The Intercamp e.V. supports and assists the annually Intercamp in every respect. Our members are responsible for a big part of the infrastructure and assist the organising nation in hosting the camp. A lot of both man-power and material is needed for a camp with 3.000 scouts. If you would like to join us and support our work, please fill in the membership form and get in touch with your national representative.
Intercamp e.V.
Taunusstraße 109a
61381 Friedrichsdorf
Germany
hello@intercamp.info
facebook